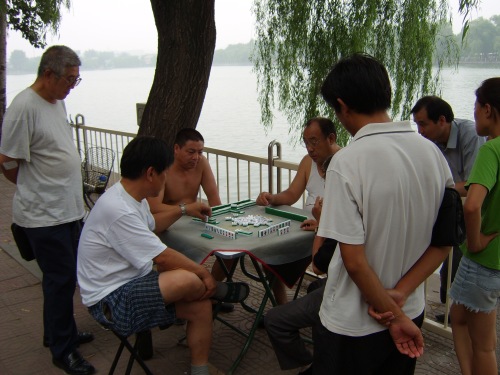 We were walking along beside a canal in the Ho Hai district in Beijing. There were three of us and the weather was hot and humid. It was July when it rains a lot. A fellow had a tourist cart. He sits in the front with a seat behind where maybe two of us might sit comfortably. He slowed down and pointed to the empty seat and gave us a price.

Well, the thought of jamming three American-size people into this seat on a hot sticky day had zero appeal to us. We were enjoying the walk along the canal where there was lots to see. “Bu yow, shay shay(No, thanks),” my friend responded. He gave us a lower price. Even it was free, we weren’t getting in. Again, we were glad to walk and said so. A third price reduction followed. We were a hard sell, no doubt about it.

We just shook our heads and walked on. He roared off covering us with dust. It wasn’t so bad because there is plenty of dust, smells and polluted air in Beijing. He saw that these foreigners were just wasting his time as well as taking the food out of the mouths of his children. We had no respect for the new entrepreneurship of modern China. What kind of Capitalist Dogs were we, anyway?

No, these were probably not his thoughts because I still had a lot to learn about China. But that’s what I thought on my first days in China.