Vast Siberia lies between the Ural Mountains and the Pacific Ocean. These rock pictures reveal a similar lifestyle to that kept by the indigenous Evenks who ride reindeer with special saddles even today.

This geoglyph is about 900 feet (275 meters) wide or two American football fields. Alexander Shestakov had to alert someone when he first discovered it among satellite images. This is what the researchers saw as they glided over checking out the enormous structure.

Researchers are examining the structure while being careful not to damage it. They have found that the stone architecture of the geoglyph is quite elaborate. It’s made of small crushed stones and clay as well as larger stones.

The Ural Mountains reveal ancient artwork. The figure on the right is probably a shaman wearing an animal headpiece.

The shaman was their link to the spirit world and protected them from harmful influences. The shaman looked mysterious with his long uncombed hair in his ceremonial coat with the long pointed tail trailing along the ground. His head covered with an embroidered hood and his face concealed with a painted mask, he beat his reindeer-skin covered charmed tambourine adding to the noise-makers on his coat. An impressive sight, indeed.

The shaman usually sat on a white fur rug in his tent surrounded with meaningful items well known to the Evenks. You approached through an avenue of live larch trees and carved wooden images. He conducted ceremonies that sometimes lasted for three days or more.

There is a story here. I’m not sure what it is but remember the Evenks had no written language so it was natural to create picture stories. (Those letters were put there much later.) 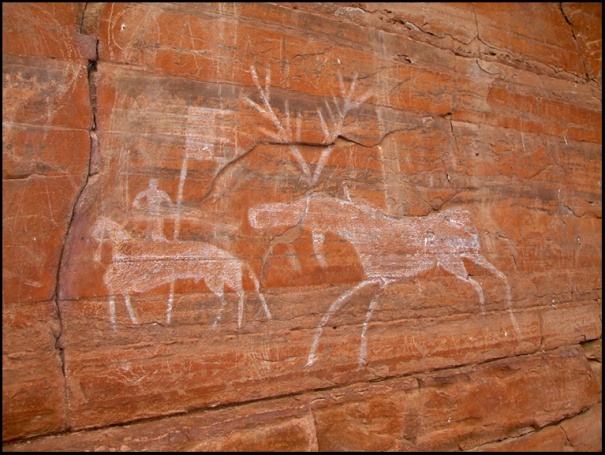 The importance of the reindeer is easily seen. Some Siberians rode horses unlike the Evenks who tamed and rode reindeer. 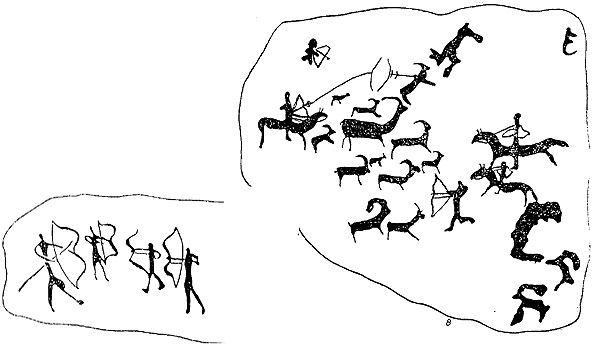 Since we don’t have any of the ancients to explain these, you can examine them yourself for their meaning.

We are lucky to find these because a nomadic people leave little evidence behind.

Once more, we see the shaman. Though the Soviets tried to modernize the Siberian nomads, some of the arctic folk hold to the old ways and are teaching them to their children like the Evenks.

More About the Evenks