The story of Siberia is full of hardship and human brutality. Norilsk meant Hell for many. It is the most polluted place in Russia and that is saying something. Step outside the city and you feel like it can’t be real. Toxic puddles line the rugged road.

Now, things are better for the people who live and work there but the ground seems beyond redemption. How could such suffering go on for so many years? It didn’t. Because Norilsk was not there. It was not on any maps like several other secret cities. If you don’t like sad stories of human suffering, stop here. Seriously.

Norilsk was founded at the end of the 1920s. Nothing really happened until 1935, when the Norilsk mining-metallurgic complex became the center of the Norillag system of GULAG labor camps. It became a town in 1953. But, so what? For outsiders: it still didn’t exist.

Nickel. Lots of nickel. Maybe the largest deposits on Earth. But who would get it out? Stalin had the answer: prisoners. Criminals and political prisoners were sent to extract the ore and smelt it nearby. Then more metals were found: copper, cobalt, platinum, palladium, and even coal. Many people were worked to death. We don’t even know how many. For two hundred years, the Russians knew there was wealth under the frozen ground. But mining it began in 1939.

The best way to look at the mines are from a safe distance, as this photo shows.

According to the archives of Norillag, over 16,000 prisoners died in Norilsk. But before they died, they worked and the food supplies did not always come but the intense cold always did. These records are from between 1935 and 1956. It was especially bad during the war years of 1942–1944 when food supplies were particularly scarce. The prisoners did revolt nonviolently in 1953. The Norilsk uprising could have ended much worse except that the boss was removed before he could kill all those who resisted working. The harsh conditions went on until around 1979.

Though working conditions have improved greatly for the voluntary work force motivated by high pay, Norilsk-Talknakh continues to be a dangerous place to work. The now independent mining company reported 3 accidents per thousand workers in 2005.

No longer a complete secret, Norilsk was decreed a closed city for foreigners in 2001.

The mosque of Norilsk, belonging to the local Tatar community, is considered to be the northernmost Muslim prayer house in the world. An attempt was made to build a railroad south of here on the edge of the Arctic Circle to allow better access to the area by land. This was never completed and more information can be found on this link.

How Can People Live Here?

Because of the permafrost ground problems, a lot of Norilsk buildings are on stilts. There is a airway between the floor and earth below. You might think this is to protect the people from the cold below. The opposite is true. It’s to protect the ground from the warmth above. The heat makes the permafrost unstable and the buildings would collapse in a short time without this clever method of construction.

The streets in Norilsk streets are perpendicular to the wind direction. This cuts the strength of gusting gales. People stay indoors a lot and make their places cosy although they do break their routines for the occasional holiday. Like many who live in Northern Siberia, they accept their life with pride. Few people can endure let alone come and enjoy life with them at the top of the world. 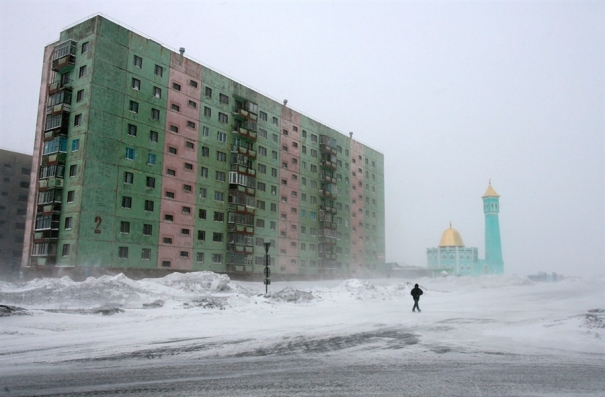 The statistics are literally off the charts. Norilsk Nickel accepts responsibility for what happened. They insist that they are taking action to cut the pollution. By 2020, the company expects to reduce sulfur dioxide emissions by two-thirds, but admits they cannot guarantee this pace of reduction because they are still developing the technology to do it.

Some looks at life in Norilsk can be seen at this link: 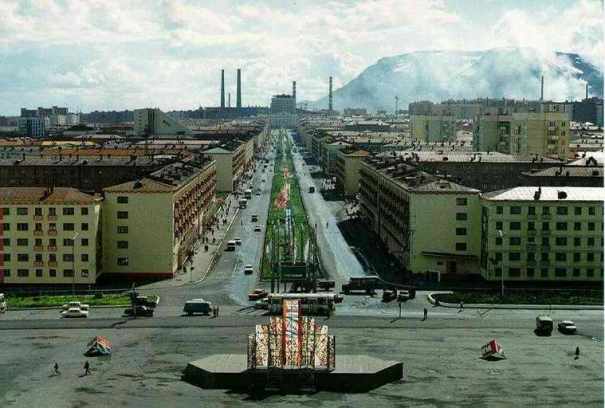 No surprise to anyone is the monument of mourning seen below. 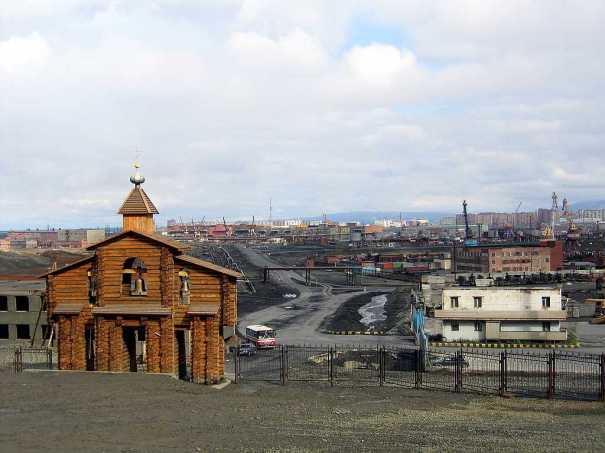 Snow covers Norilsk two thirds of the year. Norilsk inhabitants do not see the sun at all for about six weeks.

Can I Go There?

Stay where you are. Although it is possible to get there, it is unlikely that you could get permission to visit. Only workers are welcome. There are perks for the workers like exercise classes and free daycare. You can even spend time in a luxury spa. But I doubt that this will convince you to apply for a job there.

The mines of Norilsk produce 35% of palladium, 25% of platinum, 20% of nickel, and 10% of cobalt in the world. Over 150,000 people willingly endure the harsh and dangerous life in Norilsk for the high pay offered there. It remains the greatest source of pollution, as well. 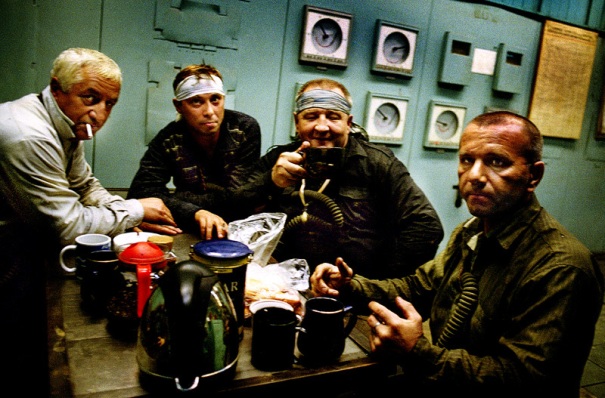