Nenets live in the north of Siberia. This is the land of permanently frozen ground or permafrost. It is also the land of tundra and taiga. Tundra is the cold, treeless plain. Taiga is the frosty, evergreen forest.

What Do You Know About Nenets?

There are about 35,000 Nenets. It’s a growing population and three-fourths of them can speak their native language. So they are not in danger of physical extinction. Their culture had been protected by the harsh climate but Russians coming up from the south have influenced them.

Nenets language is particularly rich in ways of describing the character and properties of snow. No surprise there. There are many words concerning reindeer-breeding, hunting and fishing. The younger Nenets also speak Russian and think it more cultured and useful.

Nenets have been influenced in some way by the Russians for centuries. Whether through trade or as part of empire building, the Russians have tried to control them. But the Nenets have resisted this. 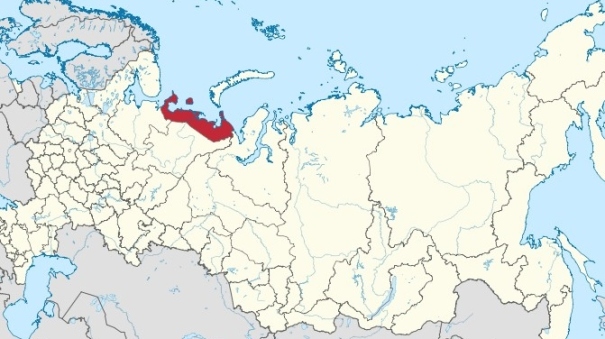 The Nenets who lived from the land began trading with merchants when they showed up. Tea, sugar, flour, tobacco and gunpowder became available but only at outrageous prices. They didn’t know these goods were far cheaper down south. They were offered hard liquor on credit to be paid with future reindeer furs. Sometimes a son had to pay off his fathers drinking tab with furs for many years.

The nomadic life of the Nenets was tied to the reindeer. Moving down from the treeless tundra to the forest taiga in autumn, and back up north in spring, the Nenets were fully adapted to the arctic north. This made it difficult for the Soviets to dominate them. They started pushing them to collective farming in the 20s. The reindeer-breeders rose up in armed struggle against this, and attacked the town of Vorkuta. The Russians used aircraft to subdue the Nenets as if they were a pack of wolves. 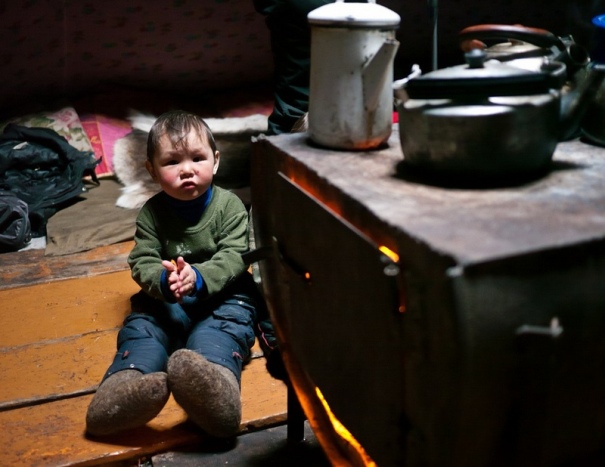 The Soviets started relocating any Nenets that were not directly involved with the reindeer into villages. Women, children and elderly people became permanent village dwellers and, in time, the men were compelled to follow their families.

In the 50s, the Soviets put all Nenets under state custody from birth to the day they completed their education. This meant growing up in a boarding school, away from one’s home and ethnic background. The state provided free food, clothing, housing and schoolbooks. This caused the young people to be disconnected with the traditional lifestyle so when they left school they were as helpless as hothouse plants on the permafrost.

The industrial boom brought more people to the arctic and more pollution. The pollution caused by mining destroyed a lot of pasture and forest. The environment suffered from acid rains and heavy metals accumulate in the moss and enter into the human diet through reindeer killed for meat. Nuclear testing has caused another grave danger to the health and existence of the people of the north.

Nenets usually live only about 50 years. High unemployment and low wages among natives have helped make the “glass ruble”, that is, a bottle of strong alcohol, a hard currency in the tundra.

These nomads move around on all-wood sledges made by hand using traditional tools. The sledges are each pulled by five reindeer. Women drive a caravan of seven sledges when moving the group called an argysh. The men are busy herding the reindeer. When a suitable place is found the head of the group sticks his khorei into the ground at the place where he wants the center of his chum to be.

People tried to study the northern nomads since the 1700’s with little success because nomads don’t leave much to study. Ironically, as the Soviets were trying to stomp out Nenets culture, other Russians were studying them. In the 30’s, guys at the Institute of Northern Peoples in Leningrad were examining the minor ethnic groups of the Arctic regions and Siberia. The Nenets were on their list and a collection of folklore was published.

The Nenets believe in a certain force called sya mei. It affects mostly women in a negative way and there are taboos that go along with that. They must not touch the sacred sledge, they must not step over anything that has been touched by a reindeer. They must not cross an imaginary line which runs from the central pole in the chum to the sacred pole at the back of the chum. They must not cut certain fish, cross the tracks of the sacred bears, step over a pregnant dog, or even hang up men’s clothes.

Nenets women may act in a way that seem completely incomprehensible to outsiders when they are obeying a certain taboo. Stepping over a smoking fire several times may or may not cleanse those affected by sya mei, but you cannot be too careful about a serious taboo, can you? 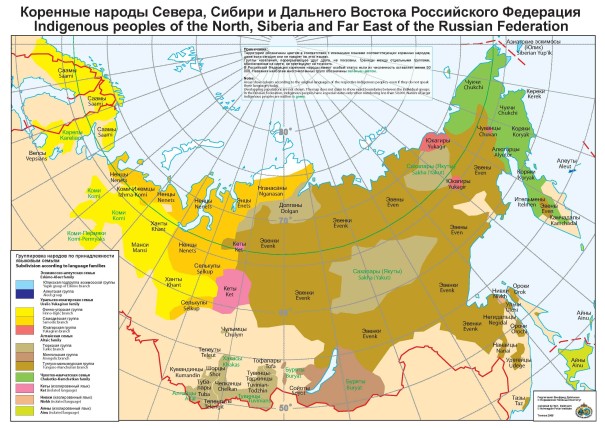 This may gross you out but Nenets’ favourite meal is reindeer meat eaten raw directly from the carcass of a freshly killed reindeer. Ropes are tied around the live reindeer’s neck, its head is turned to face the east and it is strangled by two people pulling on the ropes. The women cut open the reindeer, everyone sits around it on the ground and they begin tearing out liver, kidney, meat, throat, lungs, heart and eating them right there. A bowl or cup is passed around and people dip it in the carcass and drink the reindeer’s warm blood. I know, pretty gross.

The Soviets brought the collectivization of reindeer husbandry. But some Nenets still lead a traditional-type life and earn their living through herding. The future of Nenets culture depends on the future of the Arctic lands.

More about the reindeer