Kamchatka is a Krai. In 2007, they combined Kamchatka Oblast and Koryak Autonomous Okrug and made the area a Krai. You can ask the Russians what all that means because I don’t know. I’m just telling you what they told me.

Once, this guy named Fedot Alekseyev was washed ashore in Kamchatka. His boat was washed ashore with him in it, that is. Otherwise, he would have been an icicle. He spent the whole winter on this chilly peninsula. There were some people there called “Chukchas” but that may have really meant “Let’s get inside and warm up!” Later they found there were other groups called Koryaks, Evens, Aleutians, Itelmens as well as the Chukchis. What all these people were doing between the glaciers and the volcanoes, I don’t know. Maybe they got to the Hot Springs and didn’t want to leave.

Vitus Bering Gets it Straight

People were confused about the connection between Asia and America (and still are by the way). Nobody really knew what shape the peninsula was and how to draw it on a map so Peter the Great commissioned this guy named Ivan Ivanovich Bering to map it. Actually, the guy was Danish and his name was really Vitus Jonassen Bering but the Russians wanted people to think it was their guy who did it. By 1728, Bering was pretty sure there was some water between Asia and America and wanted to prove it. He did prove it, mapped Kamchatka and discovered some islands on his way back. It was really hard sailing around up there in the frigid waters and in 1741, Bering got sick and died on yet another expedition. He was buried on an uninhabited island among the Commander Islands.

His reports were kept secret by the Russians so nobody else really knew much about Bering’s discoveries for about a hundred years. Well, everybody felt bad about this so they started naming everything around there after him. You got Bering Island in the Bering Sea. There was Bering Strait. You got a Bering Glacier and even the Bering Land Bridge, which Bering was trying to prove didn’t exist but it was long gone and he was gone so it didn’t much matter what they called it.

There are some portraits of him here but I don’t think he had his hair like that when he was out discovering stuff. But maybe it kept his ears warm, up there in the frozen north.

When people found out how important Bering was, they decided to make a monument over his grave. Nobody knew where it was and once they got there they decided it was too cold to make a big metal thing so they built a wooden cross where they thought he might be buried and called it a day. Later, in 1944, when long underwear and gloves with fingers were invented, they put up a steel cross in a cement base. 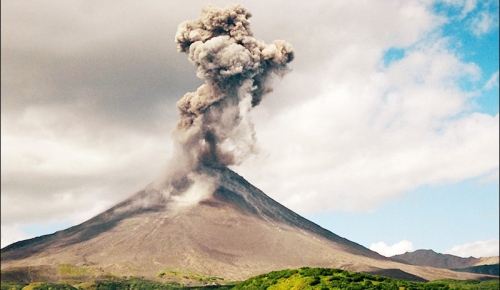 A guy named Krasheninnikov was a naturalist who wandered around Kamchatka for four years. He called his work “The Description of the land of Kamchatka” which everyone agreed was an excellent name. Sure, it was long but Russians read long things and the poet Pushkin read it. He wrote many notes while reading “The Description of the land of Kamchatka” but he never finished his poem about it.

Now there is a city called Petropavlovsk-Kamchatskiy with about 300,000 shivering people. It began in 1740. The Avacha bay seemed to be the best place to put it. By 1741 there were “good houses with gorgeous construction of Kamchatka dispatch office and a church”.

The city’s had it’s ups and downs and has been rebuilt or abandoned at various times. They started building ships there. They would put them in the Pacific Ocean, the ships would head down south where it was warmer and never come back. They put up a lighthouse and called it a major port. It was the only port around and there were few to disputed the ‘major’ bit. They got some cannons. Lenin found out about Kamchatka and sent some of Red Army there.

In 1923, they opened up a third street in the town. They needed that third street because there were now almost 2,000 people and the two streets they had were getting crowded except in the winter when nobody went out. The Soviets added fishing and industrial plants to go with the shipbuilding.

Kamchatka is hot in the short summer, cold and wet in the autumn, and then it starts snowing. But if you get too cold, you can always warm up near one of the active volcanoes. The volcanic range protects the eastern sea coast from the Siberian wind. Winter, maybe -22C although once it went down to -64C. In the village of Dolinovka, it got up to +37C so they say, but I don’t believe it.

The North part of Kamchatka is often cloudy. And the south-east has some pretty foggy fiords. August and September are considered the best months but mosquitoes are a problem. Go out to the mountain tundra where there are no swamps for the mosquitoes to breed. This a great place for “strong” tourists, they say. 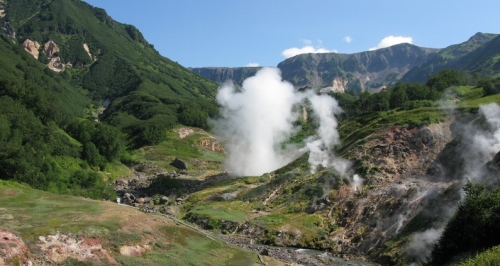 It’s not for the weather. Most people want to see the Uzon Volcano Caldera with its hot lakes and springs and the Geyser Valley. There are a bunch of active volcanoes in Kamchtka. There was a really big eruption in 1975 with 3 billion tons of lava. The last eruption was in 1991. What? You didn’t hear about it? Hey, it was Kamchatka!

It’s really all about the volcanoes for tourists. There are glaciers and geysers, too. But everyone goes for the volcanoes. It’s like walking on the moon! In fact, the Russians tested their Moon Probe there. So let’s talk volcanoes. If you want more volcanoes, click below.