What Do You Know about Yap Islanders?

The People of Yap are very traditional. We still maintain our Micronesian customs.

The women are very modest and must cover themselves from waist to knee. We consider the bikini wearing tourist immodest because they show too much leg. But when we wear traditional dress, some are surprised that we don’t cover much from the waist up.

We do some weaving and farming and, of course, fishing, mostly for tuna.

Another way we can make some money is giving “cultural tours”. You can get an idea of our traditional life style on Yap. In some cases, an entire village will come out to show you. But one problem for tourists is that you will see a lot but we don’t explain much. You will see us weaving or wearing our traditional costumes and maybe dancing. A young maiden might even put one of woven headdress on you.

Of course, you have to see our money, it’s very famous and very big! A Yapese bank has no vault. It is rows of our stone money. We show off our wealth, but it’s rather hard to carry it around and buy things. We use other money for that. More like you’re used to. Sometimes our money makes a great stage to performance our ritual dances.

What makes our money valuable is that it comes from a different island, Palau. That’s about 250 miles south of here. We would go by canoe across the Pacific to Palau, dig the money out of a quarry with simple tools and row it back. It was dangerous and many times, men died in the process.

The value has to do with how hard it was to get it. You can still find un-transported “Yap” money in the jungles of Palau! Just go pick it up!

If you come to the ‘outer’ islands, you might see us wearing a ‘lava lava’. We weave it out of thread or sometimes banana fiber. It provides modesty and comfort in our tropical climate. Outside the home, we wear ‘zorries’. You might call them “thongs” or rubber sandals. Obviously, these came later. We don’t have any ‘rubber’ trees. We usually take them off when we go into someone’s home or even when entering a place of business.

Sometimes tourists buy and wear a ‘lava lava’. It’s a comfortable garment in the heat of the day. But they wear something on top, you know, like a T-shirt. You might get a floral headband to complete your outfit.

If you can’t tell how old one of the women are, check their neckwear. A “girl” might wear a lei, but a mature woman would be wearing a black necklace.

It is a very old art to us. We used to decorate our bodies with some intricate tattoo patterns. It could show your status or how good you were at fighting, or simply how much pain you could take. You could get just your legs done or your whole body. The process was painful because they burned soot into your skin. It’s not for me but a friend has a dolphin on her shoulder.

You might not like it but you won’t forget it, ever. I mean, hearing the rasping wail of one of our singers. The rhythm and chanting is pretty hypnotic and mystical. If you could understand it, you might learn something of our history.

Dancing is usually done by younger people like in the Bamboo Dance. Older people sit on the sidelines and criticize. Everybody agrees that the costumes are beautiful. The colors, the flowers, the coconut oil and the bright yellow powder make it fun for everybody. 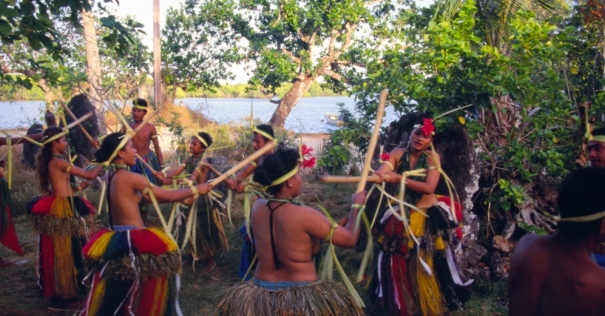 Stone money is not the only thing we value. You can have a “Gaw”, a necklace of shells and whale teeth. This is what a chief might wear. The first of these was brought here by a guy named Angumang who said they were gifts from the people of Chuuk, another island. More likely they were stolen from the Chuukese, who didn’t hand out these valuables to strangers!

We also have “Yar”, or shell money. There were used for important events like marriage proposals and even traditional apologies. It could also be used to pay for local medicine.

Like the stone money, some of these shells don’t come from around here. They come from places like Palau or even farther like the Philippines and Indonesia. The ones that do come from around here, come from a sunken coral island, thirty-five miles away. We can tell them apart but you probably can’t. Yapese pay close attention to what kind of shell money that is being offered during an exchange. Too little or too much can be really embarrassing to the person doing the offering.

When you live on islands, canoes are really important. There were different kinds. Some for carrying stuff and other for just getting around the other islands. The most common was the two-pronged bow “Popow”, used for the long voyages like going to Palau to get some money.

First, you need the right tree like a large mahogany or breadfruit tree. This canoe meant life or death to the sailors so it was carefully made with their homemade adzes.

When finished, men chanted as they hauled it to the ocean. Women wove the sails. Then you had to paint it, of course. Launching it involved a lot of dancing and ceremony. It was something to see when the sail unfurled into the wind on the towering bamboo mast. 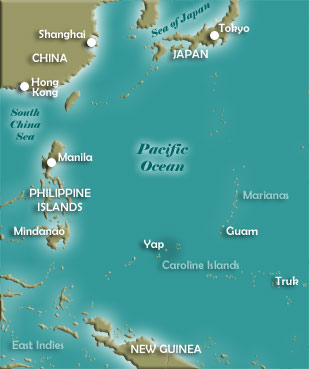 No compass, just stars. Master navigators were held in high regard and the skills were kept secret. They lived lives governed by strict taboos and magic rituals. Outer Islanders have kept these skills of canoe building and navigation and teach them to younger generations. Modern motorboats are not practical and quite expensive. But these skills of craftsmenship and navigation are in danger of being lost to the Yapese people.

The Yap Islands are far from everywhere. But tourists somehow get there and it means exciting business opportunities for the people of Yap. How do you preserve the traditions in the new millennium?

The island entrepreneurs are working hard to figure that out. The traditional lifestyle is still there but modern amenities and great dining can also be found. The ecology and culture are unique. Water and adventure sports are available. Not just on the Yap Islands can you find interesting stuff. But underwater, a new world opens. Giant manta rays can be seen while scuba diving among other wonders.

No one knows where the Yapese came from since it was thousands of years ago. In 1525, a Portuguese explorer named Dioga Da Rocha arrives in the islands of Yap and stayed for four months. Yap had been discovered!

In 1731, Father Jan Cantova and Father Visitor Walter came to bring the Christian Faith to the Yapese.

It did not go well. After several months, Father Walter went back to Guam. Soon after, Cantova and a dozen others were massacred.

But the Yapese knew nothing of the outside world and had their own way of life. They met in these huge thatched meeting houses and walked on stone paved paths around the island. They had an elaborate caste system, too. Germans building a trading station had no effect on them. The Yapese were completely uninterested in producing the large quantities of dried copra that the world wanted from them. Enter a shipwrecked American sailor, David Dean O’Keefe.

Rescued by Yapese in 1871, David Dean O’Keefe was later taken to Hong Kong. He came back to Yap later on a Chinese junk he named Catherine. He understood that the Yapese valued the stone money of Palau. So he used that to pay for copra and sea cucumbers. He bartered the Stone Money for copra for 30 years. He bought one of the islands and was considered a king. He had his own flag: a US flag with the letters “O K” below. He took two Yapese wives despite having another one in Savannah, Georgia with a daughter. In 1954, Burt Lancaster played “His Majesty O’Keefe” in a movie. O’Keefe’s Kanteen and his Waterfront Inn both remain today.

In 1885, Spain booted out the Germans and installed a governor. Priests, soldiers, convict laborers, horses, water buffalo, cattle and stones for a governor’s house and a mission soon followed. But it took Pope Leo XII to settle the feud that had developed between Germany and Spain.

The Pope gave to Spain, but granted Germany commercial rights. Spain set up a small garrison and began building Catholic churches. But in 1899, Spain turns around and sells Yap to Germany for $4.5 million.

What happened to O’Keefe? He disappeared at sea in 1901. 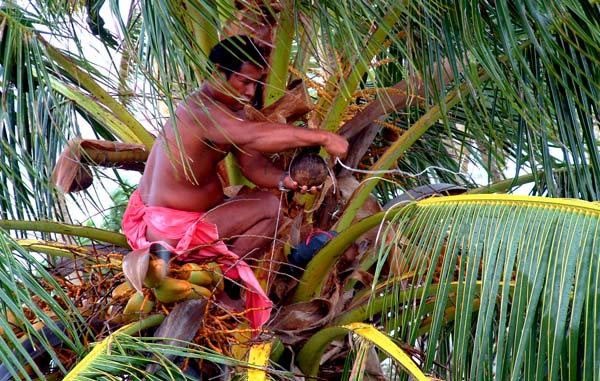 The Twentieth Century brings the World and War to Yap

1914 – World War I begins and the Japanese Expeditionary Squadron takes over the island. Soon there are over 2,000 Japanese on the Yap Islands.

In the 1920s, a typhoon destroys nearly all the homes on Yap.

During World War II, Yap was in the middle and in 1945 Americans occupied the island after Japan’s surrender.

In the mid 90s, the Yap Visitor’s Bureau is established to serve the tourism needs of Yap State and its entrepreneurs.

One thought on “Yap – Land of Big Money”